How Safe Are Your Pop Top’s Roof Clamps?

It would seem – not very. For reasons that we suspect are largely motivated by money, most Australian pop top caravans are installed with poorly designed, poor quality roof clamps. Pop Top Caravans and Hybrids are usually fitted with 4 roof clamps (over centre latches) which are designed to secure the van’s roof while driving or not in use.

The flimsy manufacturing materials and methods used for the pop top or caravan roof clamps can result in the clamps failing or decoupling while driving. The pop top’s roof can then lift and become airborne, with potentially catastrophic results.

Such an example was captured on a motorist’s dash cam on the Hume Highway, Sydney in 2017, when the driver narrowly avoided colliding with a roof top blown from a Pop top caravan, they were travelling behind.

As the video above dramatically demonstrates one can easily imagine incidents such as this potentially resulting in a fatal accident. As was unfortunately the case, in Tasmania 2019,  when a flying solar roof panel was believed to have caused of a triple fatality https://rvdaily.com.au/flying-solar-panels-the-danger-lurking-on-your-rvs-roof/

We have heard several stories from caravan and pop top owners, about their pop top roof latches (also referred to as pop top hold down clips) coming free while driving. Fortunately, in these instances their caravan roof didn’t blow off but their concern for this possibility has resulted in them purchasing and retrofitting our Snap-Flat latch to their pop top.

The specific issues and safety concerns with conventional pop top roof clamps include:

Our Snap-Flat over centre latch was designed to resolve all of the above shortcomings. The Snap-Flat is a heavy duty, stainless steel over centre latch with 2 springs installed that deliver a key ‘FAIL-SAFE’ safety feature. The springs ensure the Pop Top Caravan’s roof clamps will not accidently de-couple from the catch / hook, even if the roof clamp / latch has not been secured into the over centre position.

The problems with most caravan roof clamps are explained in more detail below.

If you pop top’s clamps have not been secured into the over centre position or due to either subsidence of the pop top’s canvas sides during towing or driving over particularly rough terrain, the roof top clamps may accidently de-couple from the catches.  This can result in your pop top’s roof lifting up and blowing off while driving, with obvious potentially fatal consequences for motorist driving behind your vehicle.

Below is the style of pop top roof clamp used on most Pop Top Caravans. 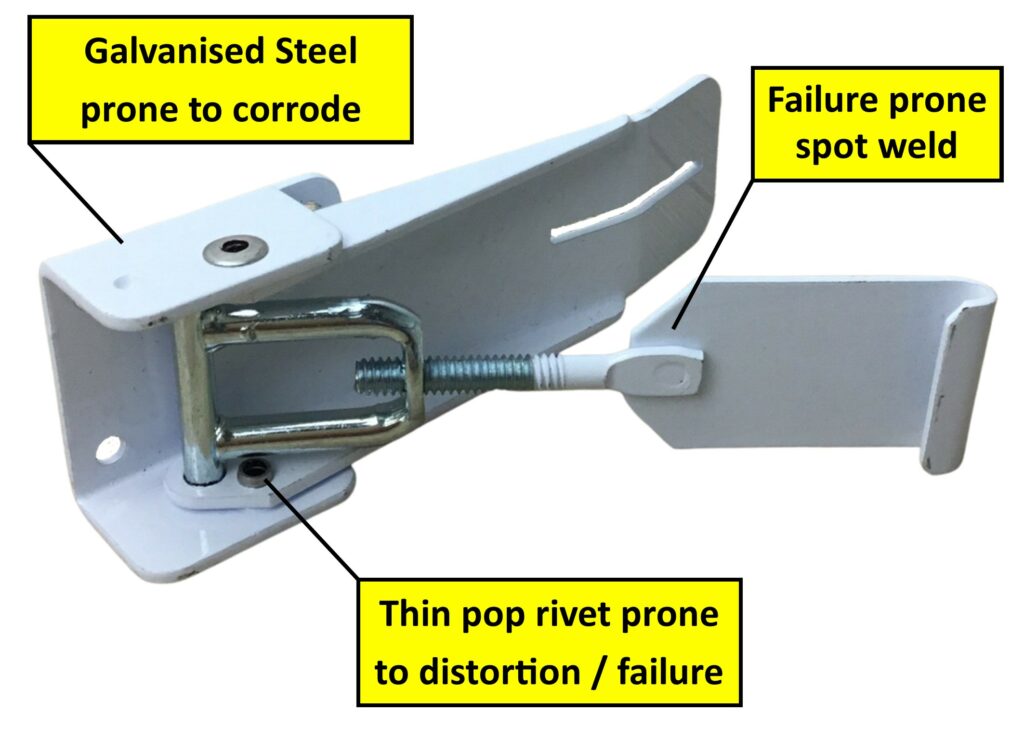 There are several deficiencies in the manufacturing method and design that can cause the roof clamp to fail or become damaged to the point that it can become inoperable and unsafe to use. These include:

Many Pop Top and Hybrid Caravan owners have reported to us their roof top clamps corroding within 1 year or less of purchasing their pop top caravan. The use of galvanised steel for manufacturing the roof clamps seems like a poor choice of material given the harsh Australian environment. For the sake of an extra $20 – $30 stainless-steel clamps could be used. This seems like a trivial extra cost on a $40K – 80K pop top.

When your pop top’s roof clamps are dis-engaged, the clamp’s blade can protrude at 90 degrees from the pop top. This is particularly prone to happen if the roof clamps have been damaged or are corroded. The protruding roof clamp can accidently gouge or snag people with one owner telling us that they received a significant eye injury from their roof clamp. 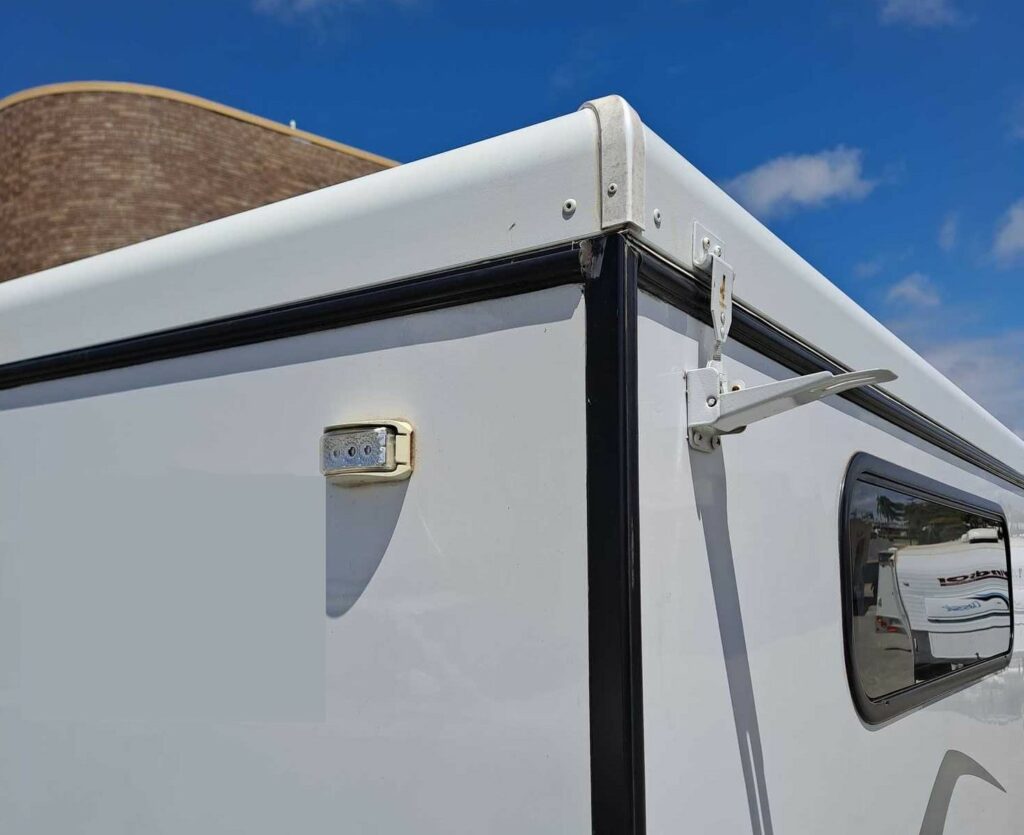 Damage, corrosion or poor construction can cause caravan roof clamps to protrude and cause injuries

If all 4 roof clamps haven’t been fully disconnected before trying to wind up your Pop-Top’s roof, your pop-top’s lifting cable mechanism can be damaged.  Caravan hire companies and repairs have told us that this is a frequent occurrence and typically cost between $200 – $500 to repair.

A Safer Solution for Your Pop Top’s Roof Clamps

The issues highlighted above with conventional roof clamps installed on Pop Tops and Hybrids are resolved by the Snap-Flat latch through intelligent design, quality manufacture and use of appropriate materials (304 stainless steel). 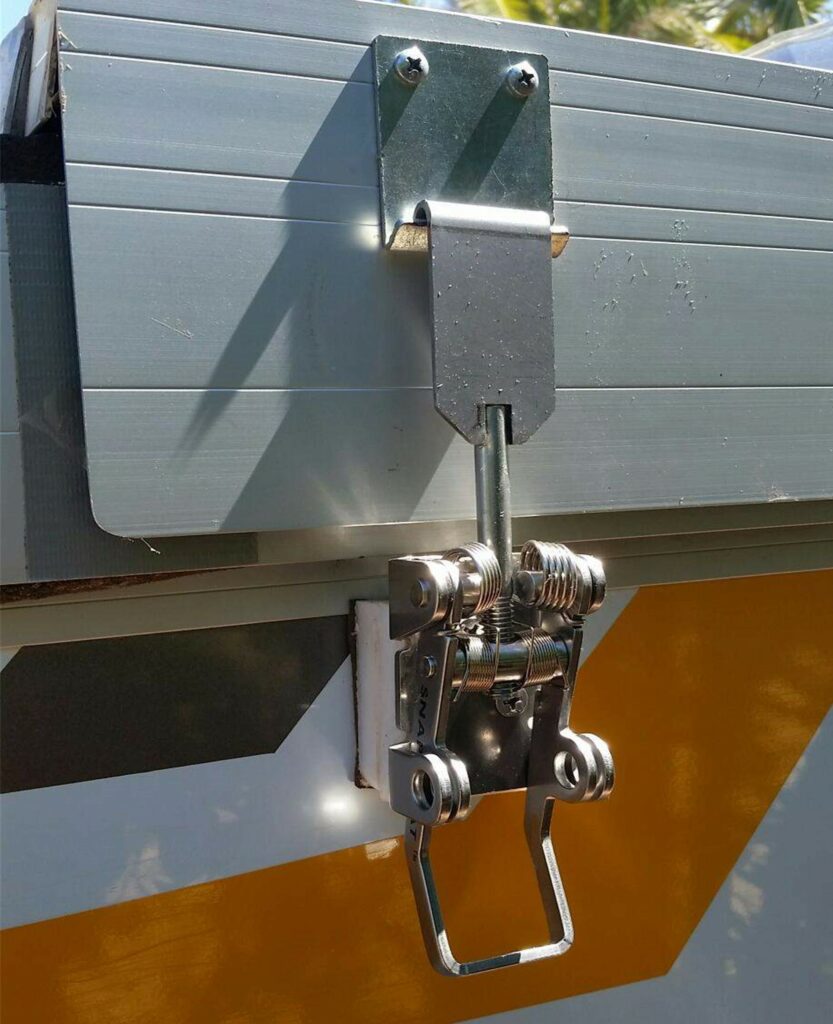 The Snap-Flat Over Centre Latch prevents the accidental de-coupling of the roof clamp from the catch / hook due to the spring tension between them.  The latch will stay secured to the hook even when no longer in the over centre position.

The latch also reduces the likely hood of the user damaging the cable lifting mechanism as it visibly and audibly disconnects. You can literally see and hear the roof clamp disconnect from the catch plate, so it is difficult to make the mistake of leaving a roof clamp connected.

The Snap-Flat latch’s design and use of 304 stainless steel ensures strength and long-term durability.

Installing The Snap-Flat Roof Clamp to Your Pop Top Caravan

The brochure below contains instructions on how to retrofit the Snap-Flat latch to your Pop Top, including detailed measurements.

or you can buy from our resellers.

If you have any additional queries please feel free to call us on 0414 646 321 or email your queries here.

For other Snap-Flat latch applications see the following: