Problems with Ute Tray Side Latches (and a solution)

Heavy duty over-centre latches for ute trays are used to secure their dropside trays. This style of tray side latch, pictured below, can cause as few problems and safety issues. These include:

When uncoupled the ute tray side latch can protrude outwards and can accidently gouge someone moving around the vehicle. The protruding latch can also be accidently knocked and damaged. 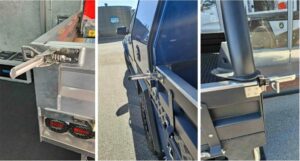 Protruding tray latches on Utes Can Cause Injuries or be Damaged

When the dropside tray latch is uncoupled and the tray dropped, the latch can protrude as pictured below, resulting in the paintwork on the mudguard being damaged.

For Ute over Centre latches to work they must be secured into the Over Centre position. There can often be a few millimetres between being properly secured and insecure, where the latch can unintentionally decouple from the catch / hook.

A ute tray latch that hasn’t been secured properly can result in the ute’s contents being spilled during transport, with obvious safety hazards.

A Better Solution for Ute Tray Side Latches

Uniseg Product’s patented Snap-Flat over center latch prevents injuries and damage to your vehicle through its unique self-closing ‘SNAP-FLAT’ feature.

The Snap-FlatTM  Over Centre Latch includes 2 springs that ensure that when the latch is de-coupled from the catch / hook, that the latch and handle ‘Snap’ back into a secure FLAT POSITION. This prevents the latch from flapping around and protruding from the ute’s side trays.

The Snap-Flat over centre latch also delivers an important benefit for trailer and tray applications through its ‘FAIL-SAFE’ feature. The ‘FAIL-SAFE’ feature is where the latch will not accidently de-couple from the catch / hook, when the latch has not been secured into the over centre position. That means that if the operator hasn’t properly secured the latch, the Snap-Flat latch will still stay engaged and protect the contents of your ute.

The Snap-Flat latch’s design and use of 304 stainless steel ensures strength, long-term durability and prevents corrosion of the latch in harsh Australian environments. The latch has a rated breaking strain in excess of 1 tonne, so is suitable for most heavy-duty applications.

You can purchase the Snap-Flat latch online, here:

or you can buy from our resellers.

If you have any additional queries please feel free to call us on 0414 646 321 or email your queries here.

For other Snap-Flat latch applications see the following: