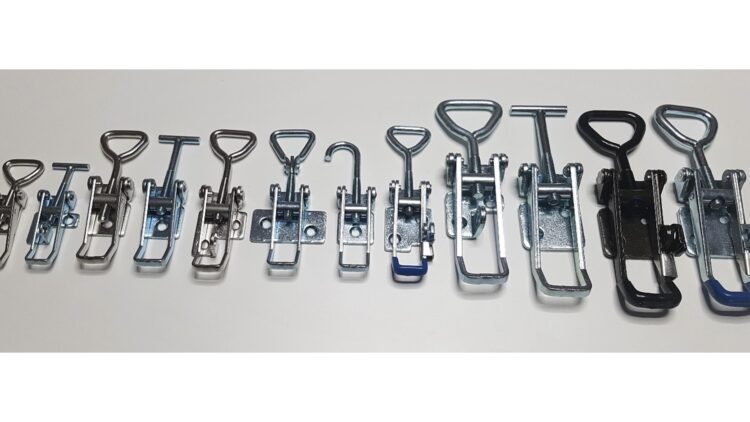 With so many different sizes, materials, designs, and styles, how do you choose the right over centre latch (or known as toggle latch) for your requirements?

The first consideration should be to ascertain if the application for the over centre latch is ‘stationary’ or ‘moving’. If the item is stationary then safety is probably not a major factor with regard to which latch is right and other factors such as the size, style and finish (zinc coated, painted and stainless steel) will determine which over centre latch you should buy.

If, however, it is important or imperative that the latch CANNOT decouple when in use, such as on a moving vehicle, then a ‘SELF-CLOSING’ latch, such as the Snap-Flat latch should always be used.

The next most important requirement is ensuring that the over centre latch has sufficient strength for your application. Again, for stationary application this is usually not particularly important however for moving applications where safety is often critical, you do not want your latch breaking.

As a rule of thumb, the ultimate tensile strength (UTS) or load rating of your latch should be twice the maximum load expected. Well made over centre latches will state the UTS or load rating in their specifications.

It they are not available then the latch has not been tested and you are buying an unknown quantity that could result in you latch failing with potentially disastrous consequences. Don’t be fooled by a latch’s appearance. A poorly designed latch can appear strong on initial inspection but have a fatal weak point

Based on their strength, industrial over centre latches can be divided into 4 broad categories:

Light duty: Designed for applications where there is little force or load, typically less than 125kg. They are mainly used for stationary objects like cabinets and boxes that are not subject to vibration or regular movement. They are typically small, easy to use and very affordable.

Medium duty: Designed for applications with a maximum load between 125 to 750kg. The extra strength can ensure they do not accidentally open or fail due to vibrations. Common applications include transport boxes or cases, toolboxes and industrial cabinets. For ‘moving’ applications, if the latch accidently dis-engaging is of a concern, a ‘self-closing’ latch such as the Snap-Flat latch should be considered.

Heavy duty: Designed for applications with a maximum load between 1,000 kg to 2,500 kg. Common applications include large transport containers or crates, industrial machinery covers, vehicle & engine bodies. For these applications, safety is paramount, and the failure of a latch could have catastrophic results and a ‘self-closing’ latch such as the Snap-Flat latch should be used.

Super heavy-duty: Designed for applications with a maximum loads exceeding 2,500kg. Applications include some heavy duty trailers and motor vehicles, such as trucks and rail carriages.  For these applications, safety is also paramount, and the failure of a latch could have catastrophic results and a ‘self-closing’ latch such as the Snap-Flat latch should be used.

The type of latch you choose may be dictated by the available space or ‘real estate’ you have for installing the latch and its catch plate. For example, some boxes or toolboxes have limited space and hence only a small sized latch can be used. Make sure you have measured the space available and that this will be adequate to accommodate you latch in it shortest and longest configurations.

Some Over Centre latches include provision to be locked using either a padlock or a safety catch. Both options will prevent the latch accidently opening. The padlock option, while less convenient, also enables you to protect your items.

As well as including a padlock able feature, the Snap-flat latch also prevents the latch accidently dis-engaging when the over centre position has been lost. Latches with the safety catch feature are not always reliable due to manufacturing tolerances, resulting in the catch feature not working.

Some applications can result in the latches being frequently damaged. This can occur because the latch handle and arm are loose and flap around when not engaged. Consequently, they can catch on other objects, including humans, or get crushed when collapsing a container or crate. A ‘self-closing’ latch such as the Snap-Flat latch prevents this by securing the latch handle and arm when they are not engaged.

Over Centre Latches are commonly available in mild steel, zinc coated steel and stainless steel (304 and 316). The material used will affect the latches strength and durability. For corrosive environments stainless steel over centre latches should be considered.

Cosmetic appearances can be important for some users and applications. For example if you have an expensive pop top caravan you may not like having a cheap, zinc coated over centre latch that is prone to corrode.

Patent applications for the Snap-Flat latch, PCT Publication Number WO2016/070235, have been granted in Japan (Patent Number 6982124). The Patent Certificate was issued on 22nd November 2021.

Patents have been previously granted for the Snap-Flat latch in Australia, China, France, Germany ,South Africa, UK, USA with applications in progress for Canada and India.

The latch was invented by Uniseg Products to address the problem of conventional over centre latches used on their collapsible, plastic bulk container, being damaged when disengaged. The “Snap Flat” feature eliminated this problem. The Snap-Flat latch also prevents the latch from accidently de-coupling, even when not properly secured in the over-centre position. This is a common problem with conventional over centre latches that can have catastrophic outcomes in some applications, such as when securing the roof of a pop top caravan. 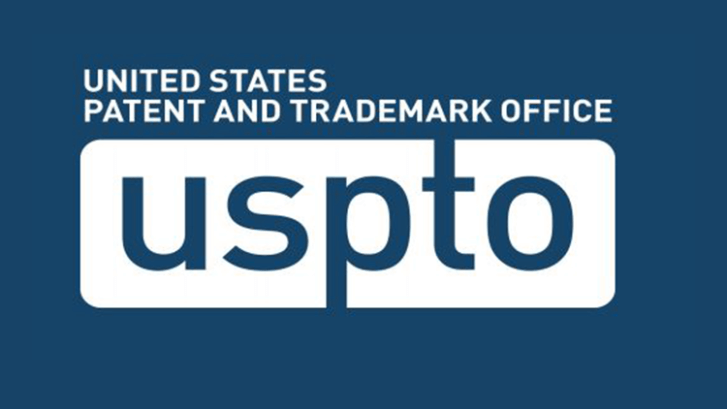 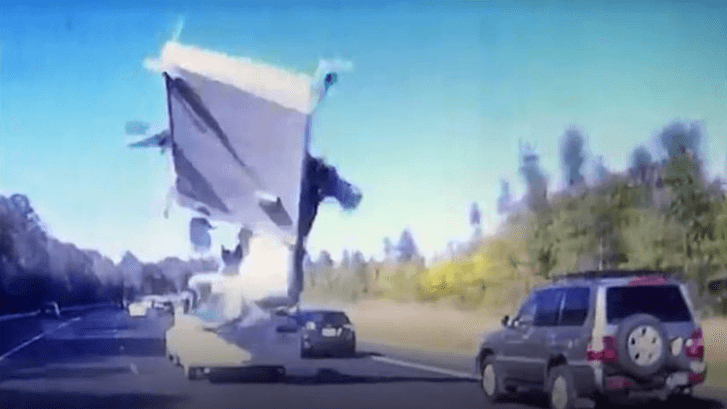 Most Pop top and Hybrid caravans use 4 over centre latches to secure the pop top roof to the caravan, when the van is not being used or being towed. There are however several problems and  safety issues that can occur with the style of pop top roof latches / pop top catches that are used on almost all Australian pop top / hybrid caravans. These include:

1. De-Coupling of the Pop Top Latch

If the pop top caravan latches (also referred to as pop top caravan side latches) aren’t correctly secured into the over centre position or due to subsidence of the pop top’s canvas sides during towing, the latches may de-couple from the catches.  This represents a potentially deadly accident if the roof lifts-up and blows away during towing. That is exactly what happened to this poor driver who’s pop top blew off while travelling along the Hume Highway in Campbellfield, Sydney. Fortunately, the drivers travelling behind were able to avoid colliding with the flying pop top.

Pictured above is the style of pop top latch used on the vast majority of Pop Top Caravans.  Their poor design &  construction leads to several problems, including:

When the pop top roof latches are dis-engaged the latch T Bar can protrude and accidently gouge or snag the user. Some Pop Tops have latches installed at eye level that have resulted in significant injuries.

Frankly, we are surprised that $40 – 120K Pop Tops come installed with such poor quality pop top roof latches / pop top catches, that can lead to such dangerous outcomes. 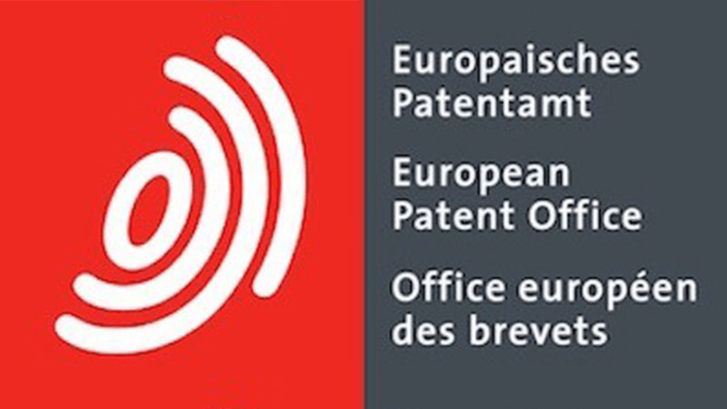 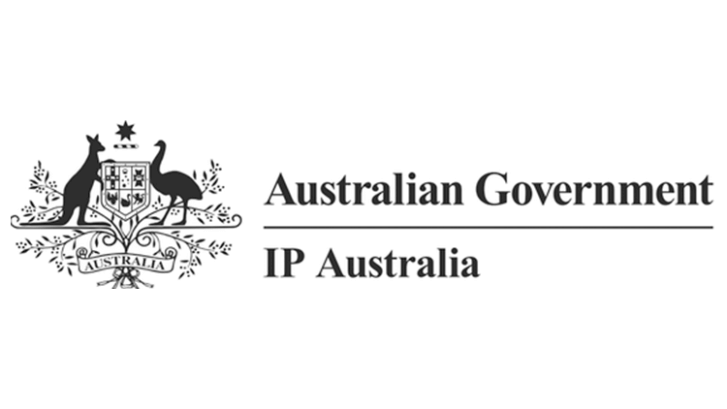 The Australian Patent Office has issued on 17th October 2019, a Certificate of Grant for Uniseg Products’ Snap-Flat latch. The certificate was issued for Australian Patent No. 2015342730 in the name of UNISEG Products Pty Ltd entitled A CONTAINER (Currently being renamed A LATCH MECHANISM). 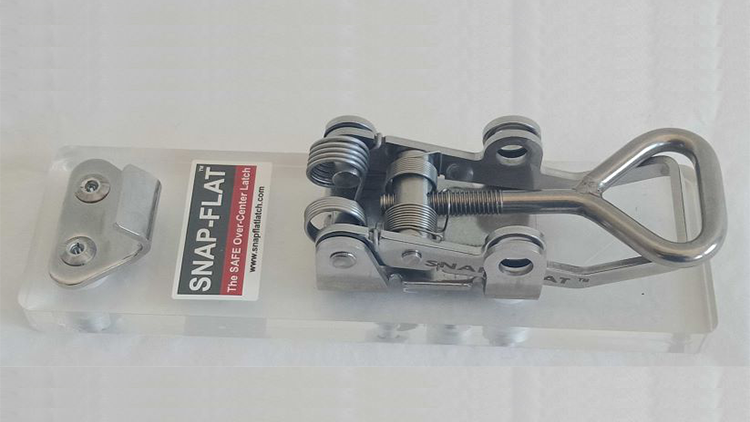 A yield and destruction test of the latch confirmed that the latch deformed at 13.4 kN or 1.365 Tonne. Uniseg would expect the latch to easily handle forces up to 1 Tonne, which would make it one of the strongest and lockable over-centre latches, of this size, available.